AppleInsider is supported by its audience and may earn commission as an Amazon Associate and affiliate partner on qualifying purchases. These affiliate partnerships do not influence our editorial content.

Not all pop-up windows are evil spam, some of them remain genuinely useful. Here’s how to get Safari on macOS Monterey to show you the ones you actually want, while still shielding you from all of the rest.

It is still the case that there are websites that use pop-up windows like it was the early 2000s and we hadn’t really heard of spam. Safari on macOS Monterey will protect you from them, and protect you so well that you almost certainly don’t even notice.

But take for example, a site such as the social media scheduling one, Buffer.com. You can use Buffer to write a tweet when it suits you, but have it be posted when it will suit your audience.

Except you can’t do that until you tell Buffer what your Twitter account is, and allow it access. And at time of writing, you can’t tell Buffer any of this because it asks via a pop-up window.

It is remarkably frustrating when this happens on any site because, it appears, you can’t know what’s wrong. All you see is that something isn’t working, and in the hope that you’ve just missed clicking on the right button, you keep clicking away.

Not surprisingly, Safari does not inform the site that it has blocked the popup. But that means there’s no way for the site to know that it hasn’t appeared.

There is, though, a way for you to determine what’s going on — and take steps to work around the problem.

Check your Apple Watch and confirm that it’s not 2007. Then click on the button or link you’re trying to use, and look at the Safari address bar.

You may have to be very quick, though. You’re also likely to have to click and look more than once as not only does it appear very briefly, sometimes Safari doesn’t seem to show it at all.

But what you will see at some point is the site’s address replaced with a short message. “Pop-up Window Blocked,” it will say for a few moments.

When you see that, you know what’s happened. And since it happens because you just clicked on a button you wanted to, the odds are that it’s a pop-up that you want.

That is far from certain. But there’s also no other way to find out than to enable pop up windows on this site and see what happens.

When you click to open what turns out to be a pop-up, it is possible to get a different message. Apple doesn’t detail this anywhere, but instead of telling you the window is blocked, Safari may show a message saying, “Show blocked pop-up windows.”

Again, it’s there and gone in a flash, but it implies you can click on that message to open up the pop-up this one time. If so, it’s possible it depends on how the site is coded because doesn’t appear to work reliably.

With Buffer’s site, for instance, catching the message in time to click it, apparently didn’t do anything. But then a few moments later, a pop-up window appeared. So it could just be that it’s down to the site what it chooses to show you in response to your clicking “Show blocked pop-up windows.”

Unfortunately, that can mean that if a site has not done this correctly, you do get a pop-up window — and it is completely blank. Sometimes when you go to close that, you find a second identical, and identically blank, pop-up right behind it.

So you are making an exception for this particular site. You would think that this would be an option under the Safari menu’s Settings for this website… but it isn’t.

It’s also a bit of a broad, sweeping setting, in both good and bad ways. The bad is that this is it, you’ve now enabled pop-ups on the site and there’s no way to block just some of them. It’s all or none.

On the good side, there is an option to make your choice apply to sites that you get to from this one. If you decide you love pop-up windows now and always want them, or at least if you’re resigned to how the makers of this particular site use them everywhere, you can tell Safari that.

By default, a site is marked as Block and Notify. If you click through to another site, Safari regards that as you starting over again and it won’t presume you want to allow pop-ups on it.

Unless before you leave the Preferences, Pop-up Window dialog, you tell it that you do. At bottom right there is an option headed When visiting other sites.

It too has options that default to Block and Notify, but also contain Block, and Allow. 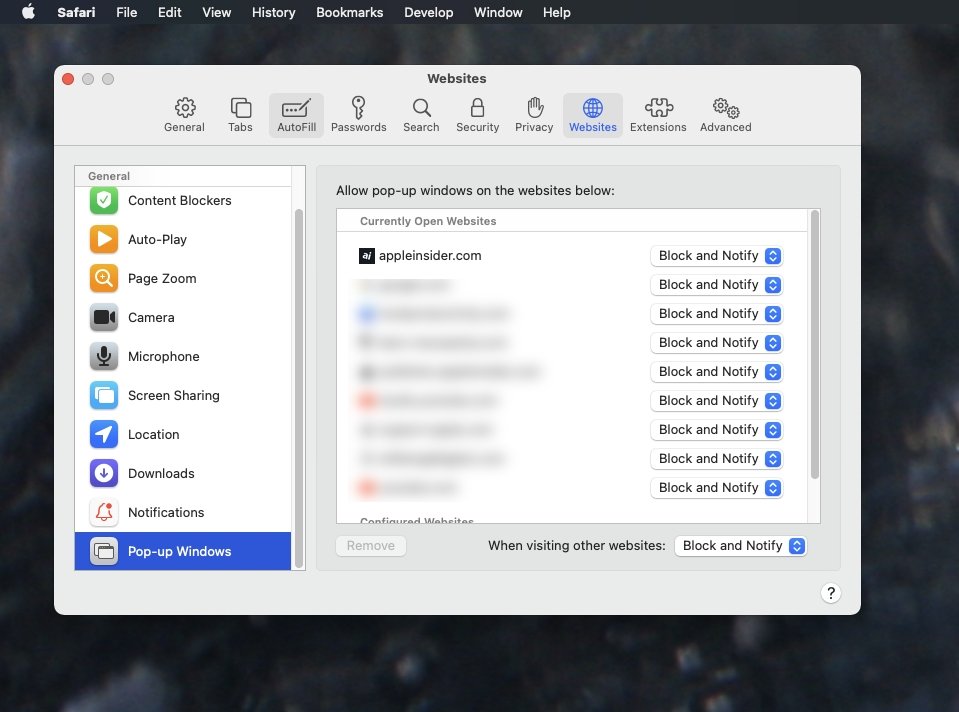 Just because you can do something, it doesn’t mean that you will want to. If you allow a pop-up and then go to a site that misuses the feature, you can come back to Preferences and revert its setting to Block and Notify.

It’s not reliably reproducible, but having chosen Block, AppleInsider testing did once or twice find that pop-ups were allowed. It varied depending on whether pop-ups had previously been allowed and were now being blocked, but it also wasn’t consistent.

So on the one hand, if you find you make the change to allow pop-ups and nothing happens, go through the steps again.

And if you’ve blocked something that gets through anyway, again go back through the steps to repeat them.

Little of this is ideal, but let Safari allow pop-up windows for a while, and you’ll come to appreciate just how much its blocking is helping you every day.